Facebook is a social utility that connects people with friends and others who work, study and live around them. It is most popular social networking website in the world people use Facebook to keep up with friends. Facebook can be integrated in to so many platforms, websites, blogs, and applications. Are you always chatting on Facebook using your phone? If so, then now you have even more options to constantly converse on the browser via Facebook Messenger for Firefox. 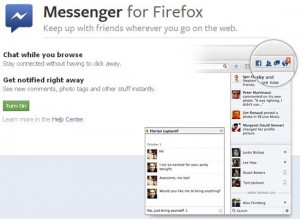 However, Mozilla Firefox is one of the best browsers around since it launched. Now, Facebook has just been released its Messenger for Mozilla Firefox called Messenger for Firefox, which allows users to keep up with friends wherever you go on the web, no matter what site you’re checking out.

With the Messenger for Firefox, everybody who uses Firefox can directly into Firefox with the social API. It’s just a simple matter of turning it on, and Firefox users can make things even awesome, there is a simple toolbar which regularly updates you with new notifications, requests and messages. The experience largely mimics what you’re used to from the social network, with real-time notifications (for photo tags, comments, and other events) also displayed.

What is Messenger for Firefox?

Facebook Messenger for Firefox is built on Mozilla’s Social API for the Web that lets you use Facebook right from your Firefox browser sidebar so there’s no need to switch between tabs. So you can continue your conversations wherever you go on the web. You can also view your notifications, friend requests and messages by clicking the icons in the upper-right corner of Firefox. Of course, when you need to focus, you can also hide it away.

Not technically an app but in a few simple steps Facebook integration can be made active on Mozilla Firefox. In order to use Messenger for Firefox you’ll need the latest Firefox 17 and a Facebook account. Then follow these steps to turn the feature on:

So hey, would you like to know how to enable the Messenger for Firefox feature in Mozilla Firefox? If yes! Then share your thoughts in the comments.