Google announced a new Android App that lets people make panoramas with smartphone cameras. These panoramas can then be viewed in 3D and 360 degrees with the Google Cardboard virtual reality headset, using the new Cardboard Camera App. Plus, the app records the audio around you as you make these panoramas. 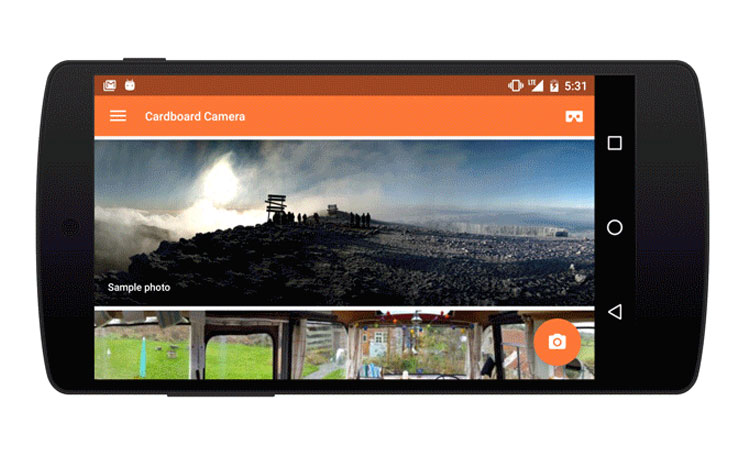 With Google Cardboard, you can take amazing trips to faraway places and feel like you’re actually there. But what if you could also use Cardboard to go back in time—to step inside personal moments like your favorite vacation or a holiday dinner with family? Now you can with the new Cardboard Camera app for Android.

Cardboard Camera turns the smartphone in your pocket into a virtual reality (VR) camera. It’s simple to take a photo: just hold out your phone and move it around you in a circle. Later, when you place your phone inside a Google Cardboard viewer, you’ll get to experience something new: a VR photo.

Cardboard Camera pulls off a bit of trickery to simulate depth within your photos (making near things look near, and far things look far), and then sends slightly different photos to each eye — thereby simulating the appearance of a 3D environment.

It’s not actually 3D, of course — you won’t be able to move around within it. But it’s quite a bit cooler than a flat, static image. Add in Cardboard Camera’s ability to attach sound from the environment to each VR Photo, and it actually starts to feel pretty darn immersive.

In Cardboard mode, you can look at the specific panorama you want to view and then use the button to select it. Then you can hear and see what you recorded. But it could become much cooler when you can show it to other people who aren’t there with you and your phone and your Cardboard.

VR photos are three-dimensional panoramas, with slightly different views for each eye, so near things look near and far things look far. You can look around to explore the image in all directions, and even record sound with your photo to hear the moment exactly as it happened.

With Cardboard Camera, anyone can create their own VR experience. So revisit the mountaintop that took hours to hike, or the zoo where you saw (and heard) the monkeys, or your birthday party with the cake out and candles still lit. Capture the moments that matter to you and relive them anytime, from anywhere.

If you’ve got the aforementioned required hardware, you can find Cardboard Camera right over here for free in the Google Play store. It available today on Google Play in 17 languages.