As the web has progressed, video has become a huge part of it and video streaming is going to be the next big thing in coming days. YouTube has already grown enormous as a video sharing platform, but there’s another called Justin.tv, which allows users to live stream any event by just connecting a camcorder or webcam with Internet for anyone to enjoy. 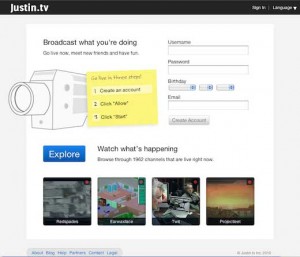 Justin.tv is a website created by Justin Kan, Emmett Shear, Michael Seibel and Kyle Vogt in 2007 that allows users to produce and watch live streaming video online. Justin.tv user accounts are called ‘channels’ (like on YouTube), and users are encouraged to broadcast a wide variety of user-generated live video content, called ‘broadcasts’.

Justin.tv is the easiest way to create live video and show anyone in the world what’s happening right now. Using only a laptop, you can share your event, class, party or thoughts live, to anyone in over 250 countries while they chat in real-time with you and with other viewers.

Justin.tv was created to help users live stream events, parties, presentations, monologues or anything else as well as users can maintain a TV show hosted by you and shared with everyone all over the world with as low as zero investment, to anyone in the world in over 250 countries.

Justin.tv makes it fun, easy and fast to gather and engage with a live audience. Viewers can actually use a chat room on the side of the video to chat and interact in real-time with the video streamer and with other users.

Justin.tv is built from the ground up to support any audience, whether it’s 5 people or 50,000. Users are permitted to broadcast to an unlimited number of people for free, and watching broadcasts does not require user registration. One new live video starts each second, and users watch more than 300 million videos every month. Broadcasts that are considered to contain potentially offensive content are available only to registered users over the age of 18.

Live video can help you motivate a crowd to tell their friends what’s happening, follow you on Twitter, buy a product, donate to a cause or get up out of their chairs and take action. What sets it apart is its ability to broadcast live television shows as well. One of the most popular channels of Justin TV is the NBA channel where games are broadcast live.

Justin.tv’s live video platform scales to support massive audiences by measuring demand in real-time and intelligently replicating streams to additional servers to meet that demand. The site sees about one new video start streaming each and every second, with users watching over 300 videos every month.

How to Broadcasts Live Video Streaming on Justin.tv:

Users who wish to broadcast live stream event video on Justin.tv should know that signing up for a Pro account won’t do anything to avoid advertisements showing up on their channels. Instead, there is a Premium broadcasting page that offers broadcasters all kinds of storage, branding and other solutions.

Last but not least, anyone can enjoy watching videos from Justin.tv by downloading the app for iPhone or the HD app for iPad. At this time, it doesn’t look like there’s any app option for Android users.

The good: Justin.tv gives up-and-comers a place to broadcast their content.

The bad: If you find any mainstream content on this service, it’s most likely a pirated copy.