The Motorola Moto G 2nd Generation is the successor to the highly successful Moto G. With a 5-inch HD screen and an incredibly fast Quad-Core processor, you can expect a smooth smartphone experience wherever you go. 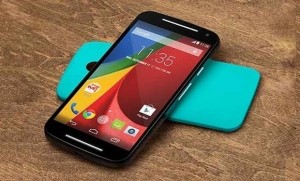 Speaking of geeky, we think that this phone is a must-have for everyone who loves the stock Android UI experience. Running on Android 4.4 KitKat, the new Moto X is powered by a Qualcomm Snapdragon 801 quad-core chip that clocks in at 2.5GHz, and is complemented by 2GB of RAM. If you still haven’t seen it, these are specs on par with HTC One E8 and M8, Samsung Galaxy S5 and Sony Xperia Z3.

The bigger display is just gorgeous – it’s bright, colourful, and the resolution has been pumped up to 1280 x 720 pixels. The primary camera has been upgraded too – from 10MP to 13MP, now with a ring-type dual-LED flash. The camera’s quality is quite good, as it reproduces colours quite well and even in low-light conditions, it suppresses noise quite efficiently. The disappointing bit is that for such a good camera, there aren’t enough camera tools and features to play around with.

The Moto G 2nd Generation has a brilliant display, stereo sound, an all-day battery, and the latest Android OS — and still less than SIM-free. The new Moto G is better than ever, keeping up with everything you do.

The Moto G 2nd Generation phone comes with a powerful Qualcomm Snapdragon 400 processor with 1.2GHz quad-core CPU and advanced graphics that let you switch back and forth between applications with ease. Listen to music while uploading your latest pictures. Quickly switch from playing a game to texting. With a quad-core processor, the new Moto G multitasks as easily as you do.

The Moto G 2nd Generation incorporates Android’s 4.4 KitKat operating system, which is the latest software in the market. The operating system is integrated with the phone’s user interface, allowing you to get a smooth smartphone experience.

Capture the moment in high definition

Touch anywhere to take a shot, capture panoramic pictures, or record HD video. The new Moto G gives you an 8MP rear camera that captures 720p video at up to 30fps, plus a second 2MP camera on the front for great-looking selfies.