The Razer, the world leader best known for its high performance gaming hardware, is proud to announce their newest gaming concept design – the Project Fiona PC Gaming Tablet. Gaming peripheral maker Razer’s tablet-like device offers PC gaming on a 10″ touch-screen, aided by two controllers on either side of the screen. 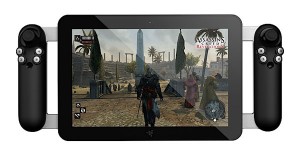 Unlike other tablets designed for general use and casual gaming, Project Fiona is a tablet concept designed to play the most popular PC games of today with an intuitive control setup for a phenomenal on-the-go gaming experience.

The attached controllers on either side of the tablet take away the pesky requirement of using a touchscreen for tablet gaming, while retaining the handheld portability of tablets. That it will run Windows 8 is only a bonus: it will be instantly compatible with a legion of top-of-the-line games.

The Razer went with a very powerful CPU that would be able to run all existing PC titles without any need to port the games. Even though firm details are sparse, we do know that the device sports a powerful Intel Core i7 processor and runs on Windows 7.

The Gaming Tablet will also sport a 10.1-inch touch screen, 1024×768-pixel resolution, two analog joysticks attached to its sides, a battery life akin to that of a laptop, and an accelerometer. Razer showed off the device at CES, allowing attendees to try out PC titles on the tablet, such as Tom Clancy’s HAWX 2 and Company of Heroes.