Discover the benefits of one Windows experience. Office apps and Outlook Mail have familiar rich editing tools that scale to fit the screen you’re using and the brand new Windows Store makes it easy to find apps, music, and videos. And with Cortana for Windows 10, you can use your PC to set a location-based reminder that will arrive just in time on your Lumia. 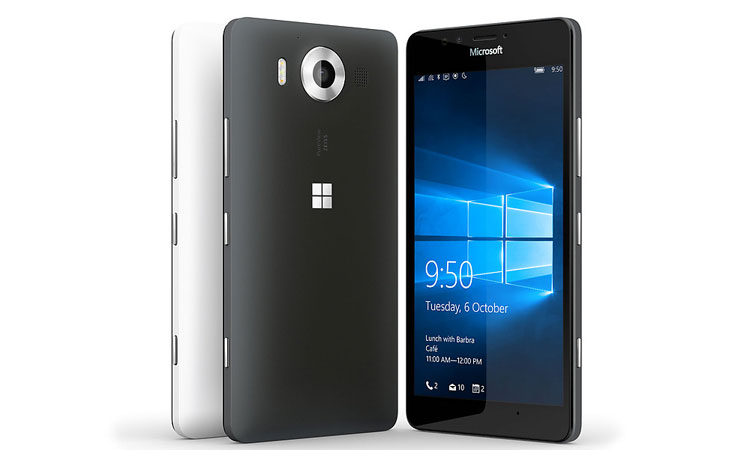 Unleash the potential of your digital life with a stunning Quad HD display. Run the most demanding apps without missing a beat and power up quickly with USB-C Fast Charging. With a super-fast processor, a large capacity battery, and wireless charging, the Lumia 950 Dual SIM has the power and performance that you’d expect from a premium smartphone.

The Lumia 950’s polycarbonate shell is thin and plastic-feeling, but that contributes to the device’s very low weight and provides numerous advantages: Hidden microSD and SIM card slots, a user-replaceable battery, and the chance to buy high-quality third-party replacement shells with rich textures. That shell also sports wireless charging capabilities, unlike any iPhone ever made.

The Microsoft Lumia 950 has a modern processor (Qualcomm’s Snapdragon 808); lots of RAM (3GB); plenty of storage (32GB) along with a microSD slot if you want to expand it; a big battery (3,000mAh) that can be swapped; and wireless and quick charging features. The 5.2-inch display has lots of pixels (Quad HD resolution) and is plenty sharp, though it can look a bit washed out. All of this adds up to a well-performing device that gets me through an average day of use without any major performance issues.

With powerful camera features like Rich Capture, a triple LED natural flash, and a 20 MP sensor that has been engineered to virtually eliminate motion blur, you’ll have the confidence to capture anything. Want your pictures in sync across devices? Use the new Photos app to keep your precious memories safe and always available on your phone, PC, and tablet.

The Lumia 950 costs too much and offers too little for all but Windows diehards to take seriously. It’s been five years since Microsoft rebooted its old, failing Windows Mobile software into the Windows phone platform we see today, and the company still hasn’t been able to work out the kinks. Microsoft’s future as a world class software-maker for mobile phones is looking dim.

The Lumia 950’s camera has a dense 20 megapixels of resolution and takes fine photos. They aren’t breathtaking, but there aren’t any glaring issues with them, either. Most people will be perfectly happy with the images captured by the 950, though it can be a bit slow to take a photo and display it, which left me frustrated on more than one occasion. The one thing that the 950’s camera isn’t is groundbreaking: unlike the Lumia phones of the past, there’s no breakthrough technology or jaw dropping features here that make its images better than what you can get with an iPhone or Samsung.

With Windows Continuum to connect your Lumia 950 Dual SIM to a Microsoft Display Dock and use it with an external monitor, a keyboard, and a mouse. Office apps and Outlook scale up to create a big screen-optimized work environment that makes you more productive. It’s a PC-like experience that’s powered by your phone.

The bad: Windows phones still have a huge app deficit compared to iPhone and Android. The 950’s standout Continuum feature is buggy and cumbersome, and requires separate hardware to use. The phone’s ho-hum design feels dated.

The bottom line: The Lumia 950 is a mostly average smartphone, giving iPhone and Android users no reason to switch, and offering little appeal outside Windows phone diehards.