If you own a Nokia Lumia smartphone and enjoying Nokia Music on your Lumia, and want more of it? You’re in luck. Nokia announced the impending launch of Nokia Music+, a premium music-streaming service which brings an infinite number of skips and unlimited downloads to Nokia’s Mix Radio service for a low monthly subscription fee of €3.99/$3.99. 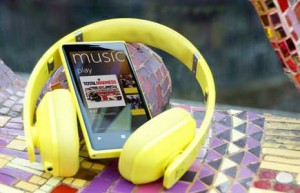 Nokia started offering its free Nokia Music service for a while, allowing free music streaming on its Lumia handsets in the U.S. since last September. But the service allowed for only a limited number of song skips and playlists. Now Nokia Music+ brings a slew of new and richer options.

The free service has allowed for only a limited number of song skips and playlists, users can download up to four Mixes, each of which contains hours of music, and play them without an Internet connection. The paid service removes that limit, offers higher quality streams, allowing unlimited track skips and downloads of playlists for offline playback about half the cost of other subscription music services and looks like a great value.

The Nokia Music+ is the only smartphone music service out there offering access to millions of songs out of the box without the need to sign up, sign in, or suffer adverts in between enjoying the music. When you add in the ability to skip songs and save playlists for offline uses like the tube, you have something unique.

The new service will also offer lyrics for users’ mobile devices and a Web app for home use. All you need to do to use the service is to run the app that is included by default on Lumia devices. From here it is possible to browse more than 17 million songs it makes available, create personalized radio stations based on your own preferences, or listen to popular stations instead. Users can also set rules to only download higher quality audio when they are on Wi-Fi, for example.

So, here are Nokia Music+ features what this small monthly fee offered users:

Higher quality: The Nokia Music+ service offers the high quality of streaming music from Nokia Music, even over a 2.5G connection. Nokia Music+ allows users to download music at eight times the existing quality. Plus, users can set rules to only download high quality when you’re on WiFi, for example.

Unlimited downloads: The free service users can download up to four Mixes (each of which contains hours of music) and play them without an Internet connection. The paid service removes this limit – So, Nokia Music+ users can make available as many mixes as they want for offline consumption as long as they have enough storage space to do so.

Unlimited skips: Whether users like to skip from track to track, or just want extra control over what you hear. There’s no stopping you with Nokia Music+ while Nokia Music users are limited here.

Desktop access: The Nokia Music+ subscription also gives users access to the service without your phone. A web-app gives you the ability to play Mixes on your computer, smart TV or other connected screens.

Lyrics: Words to the songs users are listening to, right on their Nokia Lumia. Either in a scrolling list, Karaoke-style format, or a display you can scroll up and down.