WhatsApp, the most popular messaging app in the world, has added a ton of new emojis in its latest update. WhatsApp had already rolled out these new emojis to their iOS and web clients. Now it’s finally making its way on over to the Android app in version 2.12.372, which you can download below and sideload onto your device. 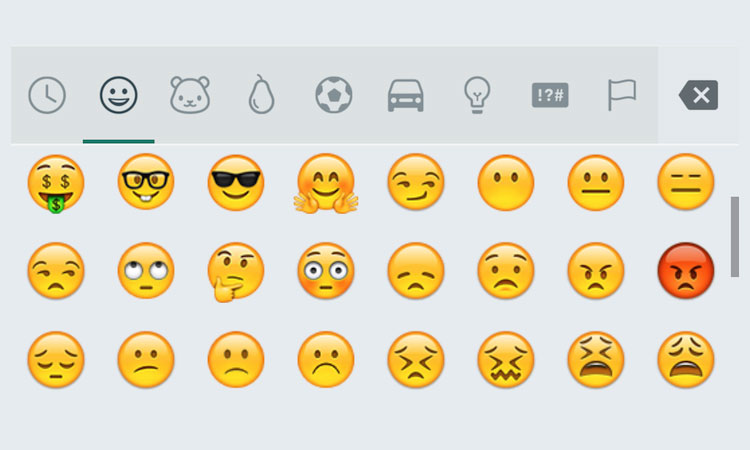 There are new facial expressions for hugs, upside down smiles, dollar signs, rolling eyes, nerds, and extreme sadness, among others. There is a new sign of the horns gesture that joins the previously added vulcan (Spock) salute and raised middle finger.

Some of the new WhatsApp Emojis include new facial expressions. Including hugs, upside down smiles, rolling eyes, and so much more. There is also some new family emojis as well as some LGBT emojis, to keep everyone happy. Others included in the update are a turkey, a shamrock, an unicorn, a spider, a popcorn box, a popped champagne bottle, a taco, a burrito, racing cars, medals, ice skating, volleyball and more.

There are a few new tabs included as well, which make the tabs at the top look a bit bunched together. Like one for food as well as sports/activities. There are tons of new ones included here in this update, and many we’ve probably missed a few as well. But there are plenty to keep users happy, at least for a good little while.

Family emojis have been extended with the addition of plenty of LGBT choices. Among other novelties, the nature tab sees a turkey, shamrock, spider, unicorn; the food tab has a popcorn box, popped champagne bottle, taco, burrito, hot dog; and sports/activities get their separate tab and now include racing cars, medals, ice skating, volleyball, weightlifting, and a quirky levitating man in a business suit.

New travel destinations and palces of worship have been added too. The objects now get their own tab with crossed swords, shopping bags, a joystick, a microphone, a waving white flag, and a rather grim coffin and funeral urn.

Flags have been separated from symbols, and the latter see new additions like playback control buttons. Oh, and the hearts have moved to the symbols tab instead of being included with faces and people.

To use these new emojis you will need to be on the latest version of the app, which is 2.12.372, and you will need the person you are sending messages to on WhatsApp to also be on that version, otherwise these new emojis will be just white boxes. Like how Android showed emojis back in the day, basically. There’s not much else added in this update to WhatsApp unfortunately, just an emoji update. But that should keep everyone happy.