Internet search giant Google has updated its YouTube app for Apple’s iOS for iPad and iPhone 5. As part of an update, The YouTube app now features an interface optimized and works on the three different screen sizes. 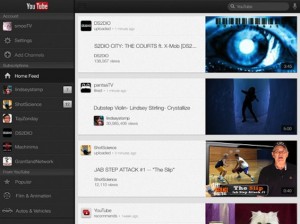 Other additions include support for video streaming over Apple’s AirPlay feature, support for URLs within video descriptions, and what Google says are ‘videos that start faster and play more smoothly’.

Other new features include the ability to add or remove videos from playlists and improved accessibility. That app completely changes the look and feel of the software to better match Google’s desktop Web mail counterpart and it also added support for multiple accounts.

The app looks different than the previous default iOS YouTube app thanks to some visual tweaks by Google and the addition of a sidebar menu with lots of options. The app also brings a host of other features to the table including the ability to tap the logo in order to bring up a Guide of a user’s channels, Clickable links in the descriptions of videos, an option to add and remove videos from Playlists, and improved accessibility with the app’s VoiceOver feature.