Google just released an official YouTube iOS App. A YouTube app is currently pre-loaded on all iOS devices, but Apple and Google recently confirmed that they did not renew their deal for iOS 6. 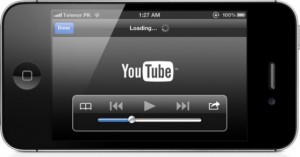 Apple said in August that a license to include the pre-loaded YouTube app in iOS had expired, meaning that the app — which had been a staple since the first iPhone — would no longer be a part of the package when consumers bought a new iPhone.

As a result, when Apple rolls out its revamped mobile OS in the coming weeks, the dedicated YouTube app will be gone, so Google had to develop a standalone app for inclusion in the App Store.

Google, The search giant promised a few new features on the app, including access to more videos, suggested search results, and a menu that users can swipe out to view subscriptions.

However, The new YouTube app will create more moneymaking opportunities for Google and video producers because it allows advertising to be shown with the clips.