How to Turn iPad into game console using Joypad Controller

If you have an iPad and an iPhone, you can download the Joypad Game Controller to convert your iPhone into a controller for your tablet using Joypad apps that turn iPads into consoles and iPhones into controllers that work hand in hand to deliver a console like experience to users. 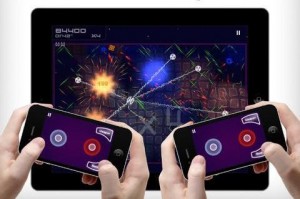 The Joypad Game Console enables a dashboard that turns the iPad apps list. This kind of Xbox Live is an iOS version, the game has a number of features, games that are already installed on the iPad is a list, and supports all games that have a complete list of Joypad.

Install the app on your iPad, and then install ‘Joypad Game Controller’ on your iPhone. The two applications will find each other over WiFi and sync up. A controller will appear on your phone, which you can use to navigate the dashboard. When you launch a game, a controller specifically built for that game will appear.

If you try it out, let us know what you think about Joypad Game Console and Controller in the comments.