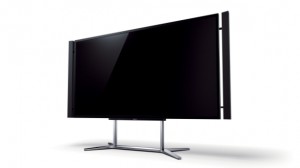 This is the first time home viewers will be able to experience 4K video of this caliber at home, and from the cameras, to its Colorworks digital facility opened in 2009, to the special white glove service charged with periodically updating the hard-disc’s content for well-heeled buyers, Sony plans on pushing more soon.

The Sony 4K Ultra HD Video Player is packed with a number of entertaining 4k content, together with full length Hollywood features as well as gallery of videos. It is especially intended to provide television viewers the same picture quality seen in movie theaters, may upscale Blu-ray films and all other video inputs, and have a minimum resolution of 3,840 x 2,160 pixels.

The Japanese electronics giant said that it’s now bundling an Ultra HD video player with the TV, giving users access to high-resolution content. And purchasers of the “4K Ultra HD Home Experience” also will receive an Xperia Tablet S that serves as a remote control.

The player will have a server wholly on no-additional cost on lease that comes packed with 10 native Ultra HD resolution films. If you get bored with the films, then don’t be upset as there are also other options like sports clips to enjoy 10 full-length feature movies presented in native 4K for the home are as follows:

“Sony is committed to delivering the finest 4K Ultra HD entertainment experiences to customers,” Mike Lucas, senior vice president for Sony Electronics’ Home Division, said in a press release. “The launch of the 4K Ultra HD Home Experience is another world first for Sony, and will wow consumers with 4K Ultra HD content.”